The Rainey Street District continues to evolve, most recently with the opening of Salvation Pizza at the base the Skyhouse Apartments, and across from Milago condos. And another pizza is apparently underway just down the block at 78 Rainey.

Jude and I stopped in the other day and enjoyed a white pizza and it was very, very good.

This is Salvation Pizza’s 2nd Austin location (the first location is in the University area on 34th street), and it’s pretty much what you’d expect.  Simple menu consisting of mostly pizza, a full-bar area, hip waitstaff, and a no-frills atmosphere. While we found the atmosphere to be a little too sparse and dark, we did heartily appreciate the food itself.  For those into sports, the restaurant does have two larger sized tvs, great for watching the big sportsball game.

Something to note – they currently only sell by the slice for lunch and the smallest size pizza they have is a 14″, per their menu.  So, go in a in a group, or really hungry, or prepared to take home a little bit of left-overs. They do offer single-serving sandwiches, salads, and appetizers, if you aren’t in the mood to eat an entire pizza by yourself.

Other notable business on that stretch of Rainey include Royal Blue Grocery and Roar Salon (a high-end, super hip salon who moved from their 5th street location last year).  A day spa concept called Blossom Spa Boutique is set to open soon, and will also be located at the bottom of Skyhouse.

The northern corner at the bottom of Skyhouse supposedly is spoken for, as well – though we’ve not seen any action in the location just yet. Last we heard, the space is being reserved for a southwestern restaurant concept.

Additionally,  the folks that control 78 Rainey also recently filed a Site Plan permit to build an almost 5,000 sf restaurant and cocktail lounge on the site.  Right now it’s a small home that’s being used as an office for JMI (part of the team responsible for the new Hotel Van Zandt).  We’ve been told that Due Forni, a pizza and wine concept that’s already in downtown on E 6th, is planning to inhabit the site.  They’ll be adding substantial square footage to what currently exists, and creating a large patio for outside seating. Reportedly, the design is in keeping the feel of the Rainey bungalow bars (we haven’t seen the renderings). 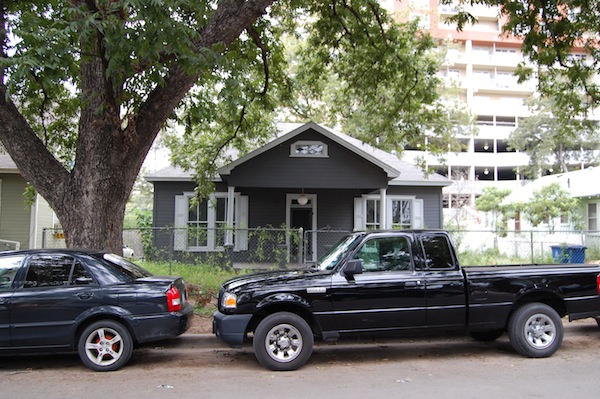 The Rainey district is definitely in the running for the most quickly growing area of downtown Austin.  Rainey is already dense with existing residential development (Skyhouse Apartments, Milago Condos, Towers of Town Lake, Windsor on the Lake Apartments, The Shore Condos, Villas on Town Lake), and more housing is on the way in the form of The Millenium Rainey Apartments (under construction) and proposed condo projects like 70 Rainey and Waller Park Place). The Hotel Van Zandt is slowly inching towards being complete, as well. Retail tenants are likely to do well in the Rainey Street district simply because of the mass of people who live in the area.